Lee shares real-life inspiration for Radio Raheem in short with Eric Garner and George Floyd, his experiences in the protests and why “Agent Orange” must be voted out.

Jimmy Fallon had to warn his viewing audience before sharing Spike Lee’s stirring tribute to George Floyd because of the graphic nature of its content. But as he sadly pointed out, “This is graphic, but it’s real,” he said. “It’s violence from police officers.”

Of course, violence from police officers is what has sparked the greatest race-driven protests in the history of the nation, still marching strong more than two weeks after the tragic murder of Floyd, an innocent black man killed publicly while in the custody of Minneapolis officers, while Floyd and onlookers pleaded for his life. 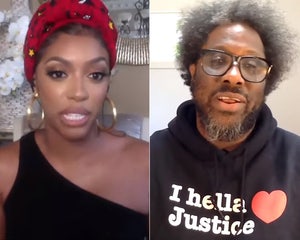 Before he showed the clip, Lee wanted to put it fully in perspective. The short film is a compilation of the graphic choking death of Radio Raheem from his 1989 film “Do the Right Thing” spliced with the deaths of Floyd and Eric Garner in 2014.

Like Floyd, Garner pleaded with officers, telling them, “I can’t breathe.” And like Floyd, his pleas went ignored until he died. That plea was used in 2014 to try and raise awareness for police violence against minorities and has become one of the loudest messages of the current protests.

What Fallon didn’t know was that the character of Radio Raheem’s death was actually based on another innocent black man choked to death by police officers.

“His murder is based upon the real-life murder of Michael Stewart, who was a graffiti artist here in New York City, 1983,” Lee told Fallon. “New York City transit police jumped on him, put him in a stranglehold and he died in a coma several days after that.”

J.Lo, A.Rod Protest with Signs Made by Max & Emme: ‘Let’s Get Loud for Black Lives Matter’

“When I saw Eric Garner, I’m like that’s Ray Raheem based upon Michael Stewart,” Lee said. “And then to see our brother King Floyd, and I know that he saw what happened to Eric Garner. So he’s seeing that in his mind as his last eight-and-a-half minutes were being suffocated out of him.”

In other words, “3 Brothers” may feature footage from Lee’s fictional film, but it is the depiction of three similar real deaths across more than three decades. It speaks of the problem with painful, difficult visuals that must be seen.

But as painful as those deaths — and all the others not depicted in Lee’s film — might be, Lee sees hope in what he saw in the streets. While he’d been trying to heed stay-at-home orders as the COVID-19 pandemic is most definitely still there, Lee said he decided, “I gotta be in it.” 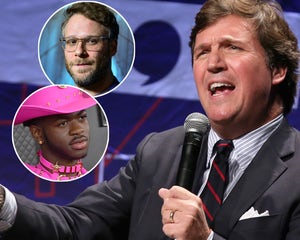 Fallon had an image of Lee on his bike, wearing his mask, and he said he was “very enthusiastic” not only about what he saw happening around him, but who he saw around him.

“To see the young white generation, my sisters and brothers, they’re out there,” he said. “It’s not just black and brown people.”

Seeing that momentum and the outrage and their continuing commitment to the cause and to fighting for what’s right, Lee even feels confident that they’ll bring that same energy to the polls in November. Further, he says that they must.

Bachelor Alums Support Petition for Next Bachelor to Be Black, Greater Overall Representation

“People are gonna come out and vote and say, hell no to Agent Orange,” he said. “Like, you gotta go. That is my hope. That’s my prayer.”

He explained by saying that if Trump gets elected, “the world is in peril.”

Stassi Schroeder & Kristen Doute Apologize to Faith Stowers: ‘No Excuse’ for Past Actions

“They had to talk him down from siccing armed forces on peaceful Americans,” Lee argued. “It’s like this guy’s never even heard of the Constitution of the United States of America.”

Like many, Lee took particular issue with Trump evoking George Floyd’s name in a recent speech about the economy. He appeared to veer off that topic to talk briefly about the protests.

“Equal justice under the law must mean that every American receives equal treatment in every encounter with law enforcement regardless of race…Hopefully #GeorgeFloyd is looking down right now & saying this is a great thing that’s happening for our country…in terms of equality” pic.twitter.com/7rNQ4EX8Gq

It’s unclear what specifically was great in terms of equality on June 5 when the president made those comments, as there was no legislation passed or presented and no significant changes announced.

This led many to believe he was referring to the latest U.S. jobs numbers, which Forbes reports were actually inaccurate and notably worse than what the president was touting anyway (May’s unemployment rate stands at 16.3 percent rather than the touted 13.3 percent, still an improvement from April’s 19.5 percent, rather than the reported 14.7 percent).

“For him to speak for George Floyd looking down from heaven saying that this is a great day in America?” Lee said. “Just don’t say nothing! Stop. You should not be talking about, you should not be speaking about our brother.”

Trump has been widely criticized for his handling of the ongoing civil unrest in the wake of Floyd’s murder, including calls for military action against protesters and a perceived lack of compassionate leadership.