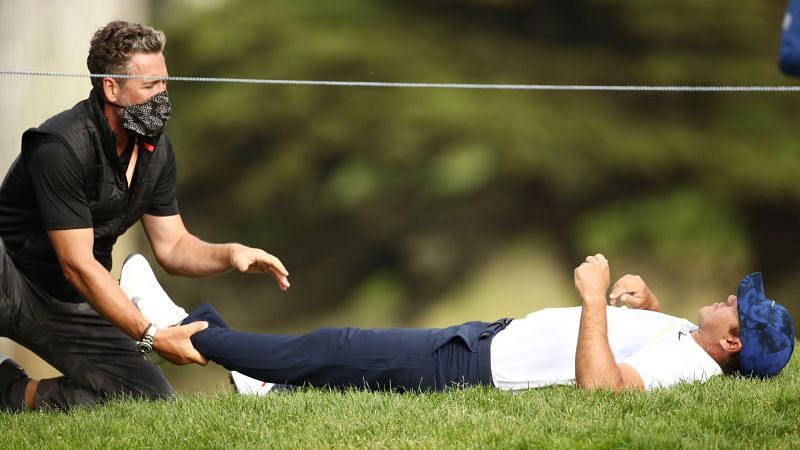 Brooks Koepka played down any concerns over a hip issue after the second round of the US PGA Championship.

Bidding to win a third straight US PGA title, Koepka carded a two-under 68 at TPC Harding Park in San Francisco on Friday to be two shots adrift of leader Li Haotong.

But the American required treatment on his hip three times during his round, raising concerns over his health heading into the weekend.

Koepka, however, played down any worries, saying: “It was my hip. Nothing to do with my knee. It’s fine.

“I woke up this morning, it was tight, and worked out and it got even tighter and then we loosened it up. It was a little tight when I was hitting balls on the range but it’s nothing to be worried about.

“We’ll loosen it up again and it will be a lot better.”

Koepka finished his round with a birdie at the final hole and sits in a six-way tie for second at six under.

A closing birdie for @BKoepka.He’s two back heading into the weekend in search of his third straight @PGAChampionship. pic.twitter.com/T8E3OWqlPT

The four-time major champion was happy with his form, saying missed putts cost him an even better second-round score.

“It was nice to finish that round with a birdie. It got I thought pretty difficult from about 11 on. The wind picks up, and it’s quite difficult,” Koepka said.

“It’s not an easy golf course. You’ve got to find the fairway and then find the uphill putt or hit it close to the pin. These greens are so good.

“You can make a lot of putts. I hit a lot of good putts today, just didn’t go in.”

Benzema assist can be one of the plays of the season